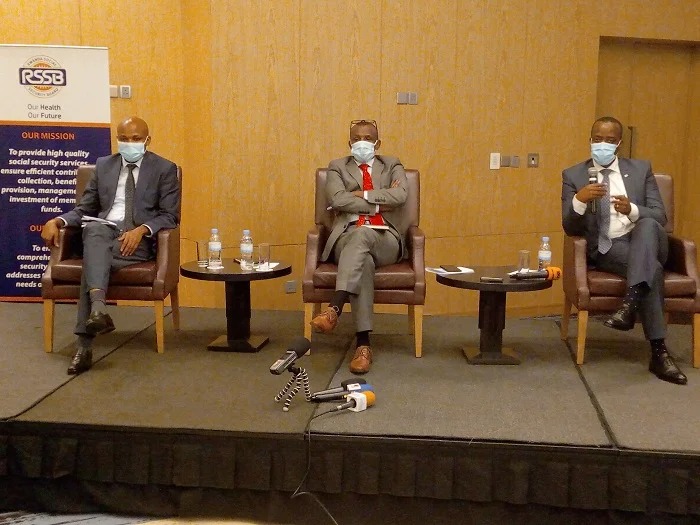 In a bid to transform RSSB into a member first, data-driven, and high performing organization, Rwanda Social Security Board, this fiscal year kicks off with a new elaborate and ambitious five-year strategic plan 2020 - 2025.

To attain these goals, RSSB will be facilitated by three key enablers that include:   administrative autonomy, comprehensive restructuring and IT Modernization.

‘’About the autonomy, today we are thrilled that this status has been approved by the cabinet, and we are grateful to various ministries including our line ministry MINECOFIN, MIFOTRA, and MINIJUST as well as the OAG and the MPs for the role they played and continue to play to ensure this status is fully attained and implemented’’: said Regis Rugemanshuro.

‘’This special status will both improve RSSB’s operational efficiency and enhance performance. The move will also allow RSSB to swiftly compete on national and regional financial markets which would see RSSB investments flourish’’:  Rugemashuro added.

One of the RSSB’s major hindrances has been its structure; with the addition of the new schemes over the years, it was difficult to settle on a structure that addresses RSSB’s overarching needs.  Currently, RSSB is in the process of developing a new future proof   RSSB structure that will help address all lingering staffing issues.

An other IT Modernization initiative (dubbed Ishema project) that started in October 2019 will see most of RSSB processes automated; this will transalate into significant improvements in the quality and speed of service to our members and partners once completed. The target is to go live with the new fiscal year in July 2021.

RSSB is commited to becoming a customer-centric organization with a focus on a Member First philosophy,  as such, it has unveiled a new USSD as an innovative way of improving customer satisfaction.

‘’We are happy to tell our members that they can now use a mobile technology-based – USSD by dialing:  *876* staff ID number# after receiving a service to give us feedback, lodge complaints and/or express their feeling about the service provided to them’’ Said Rugemanshuro.

‘’This technology also brings some of our services closer to the members. For instance, by dialling *876#: Employees can search for their RSSB Registration number, employer can search for the registration number of their companies. CBHI and Medical schemes members can also check their Medical access eligibility without necessarily going to Medical access facilitator  or RSSB office.’’: he added.

During the first quarter, under the Pension & Occupational Hazard scheme, RSSB registered 78,399 new members; which represent 209% of quarterly targets , this was mainly driven by the school construction projects across the country. The scheme collected contributions worth Frw 24.2 billion  and paid out Frw 8.7 billion in benefits for the same period. This represent 3.2% reduction in contributions collected and 16% increase in benefits from last year’s Q1 perfromance. Maternity leave benefits worthFrw 427.7 million were paid to rightful mothers.

For the Medical scheme, on a quarterly target of 3,500 new affiliates; 2,177 new affiliates were registered and total premium collections amounted to Frw 12.6 billion. The benefits pay outs in Medical Scheme reached 88% of quarterly projections which means Frw 7 billion against Frw 8 billion planned. When taken into comparison to the same period last year, collections increased by 6.8% whereas benefits dropped by 4% under medical scheme.

CBHI coverage rate stood at 80.1% at the end of the quarter and is currently at 82.1%. This is a great improvement compared to the previous year’s overall annual coverage of 79.7%. During the first quarter, CBHI scheme collected Frw 23.7 billion in premiums (88.5% of the target) and paid out Frw 18.1 billion in benefits (105% of planned).

At the end of Q1, EjoHeza scheme registered a total of 770,450 subscribers of whom 528,003 were active savers. This represents an increase of 186,576 savers (55%) since June 30, 2020. The scheme’s total savings stood at Frw 6.6 billion.  Currently, the number of subscribers in the scheme is around 950,000 with about 700,000 members having contributed around Frw 8 billion in savings. We expect to increase savings to 12 billion over the next 7 months, thanks to grassroots mobilization campaigns.

RSSB also recorded a net return on its investments amounting to Frw 14.2 Billion over the quarter, which is equivalent to 78.9% of the target. This is due to COVID-19 impact mainly from banks holiding their dividends and negative impact on equity companies.